In June 2013, following the tabling of the Bourgie Report (Vivement, pour une culture philanthropique au Québec), the Government of Quebec introduced a program offering an additional 25% tax credit to encourage initial large donations to the arts.

To take advantage of this benefit, the tax credit:

These exceptional donations will be put into an endowment fund in perpetuity with one of three community foundations (Foundation of Greater Montreal, Fondation Québec Philanthrope, The Jewish Community Foundation of Montreal), from which the JM Canada Foundation or JM Canada (depending on the selected Fund) will receive 3.5% interest annually.

Involvement of various levels of government

This exceptional contribution will also be taken into account by two government matching programs. This gives us the potential to increase fundraising amounts in the following ways:

In other words, with a net cost donation of $6,750, your initial contribution could be increased up to an amount of $75,000, thanks to government levers.

Placed in an endowment fund in perpetuity, your contribution will have the potential to support JM Canada’s new initiatives now and for generations to come, while ensuring the sustainability of our activities.

BEHIND EVERY CONCERT, THERE IS AN EXCEPTIONAL DONATION!

*The real after-tax cost assumes that the individual is a resident of Quebec with a taxable income that is sufficiently high enough to absorb the donation’s tax credits. For individuals with taxable income of over $225,000, the net cost of a $25,000 donation could be $5,425.

**Based on available budget allocations and weighting that takes into account the amount of previously received subsidies, the annual budget, and the organization’s investment choices.

Donors should also speak to their tax advisor to discuss their financial situation. 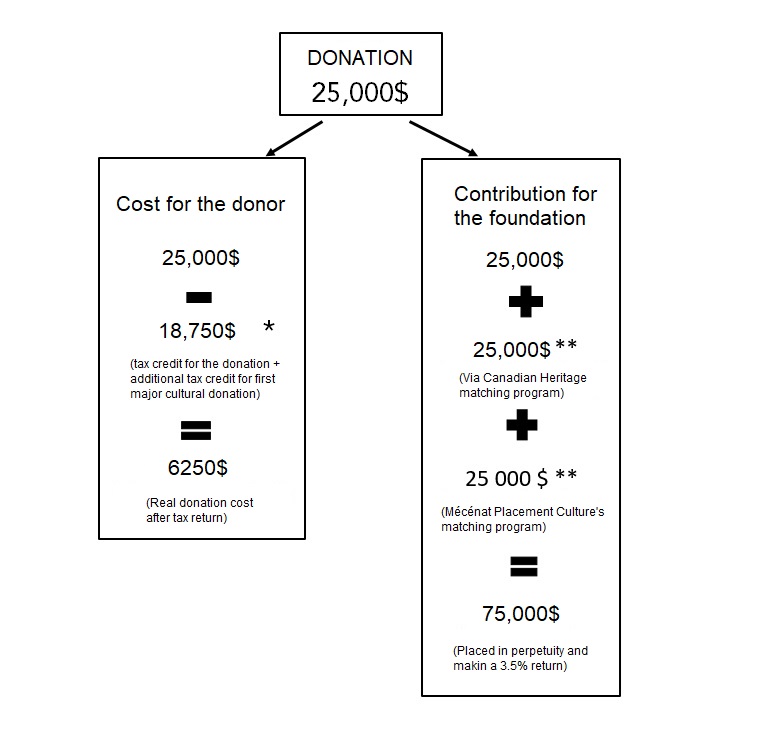